This garden is set on the former estate of Frederick Noerenberg, a German immigrant who settled in Minneapolis and began a successful brewing company, eventually becoming the Grain Belt Brewery. In 1972, his daughter, Lora, an avid horticulturist, willed the property to the park system. The family home was removed as per her wishes, but a memorial arbor marks its location. The estate’s original boathouse and barn both still exist. In 1993, the estate’s original geometric garden beds were redesigned and, in 1994, a new garden layout with wide brick walkways was finished. There are still nods to the original garden. There is a version of the old grape arbor with it’s original vines and the grove of Scots Pines, planted by the Noerenbergs as a reminder of the Black Forest of their German homeland still exists. This grove is now under-planted with hardy azaleas.

The re-designed beds are now full of exciting new cultivars combined many times in unexpected ways. Ornamental grasses mix with tender perennials and handsome vegetable varieties. Large stone-like containers sprinkled around the garden also house inventive plant combinations. Attention is given not only to the floral attributes of plants but to their folial color and texture as well. Besides extensive, large, sunny beds, there are multiple large, shady beds and a whole hillside near the parking lot devoted just to day lily varieties. The planted, full acre of display gardens, refreshed yearly with thousands of new plants, is located directly on Lake Minnetonka, giving visitors visual access to one of Minnesota’s most beloved lakes. Noerenberg Gardens has its delights throughout the growing season, from hepatica in early spring into its mid-summer glory. Unlike some gardens though, it is particularly beautiful in late summer and into the fall. 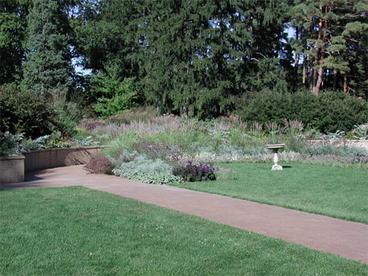 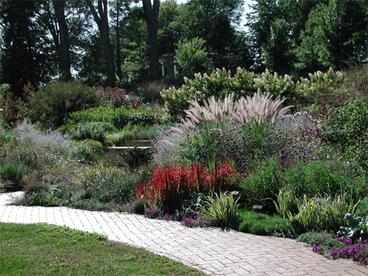