Free parking within the grounds

This cemetery has significance as a local example of the “rural” cemetery style that swept the nation in the 1800’s. These cemeteries were park-like and tended to be planted with many and varied trees. At this site an existing cemetery in an area called Jason’s Woods on the north end of the growing city of St. Paul, was incorporated into a new larger plan laid out by Wm. M. R. French and Horace W. S. Cleveland. Cleveland was responsible for envisioning and laying out the whole chain-of-lakes park system in Minneapolis which he saw connecting to the Mississippi River and, in turn, to lakes and parks in St. Paul. It was Cleveland’s vision that is responsible for much of the green space that remains and is so precious a part of Minneapolis and St. Paul. Here Cleveland and French took the rectangular tract of rolling oak savannah that became Oakland Cemetery and designed an open curvilinear plan that did not try to change the nature of the topography, but enhance it and maximize its beauty. In 1904, Oakwood had 140 varieties of plants within it. In 1924, the cemetery association planted 200 elms and in later years, 1,500 more trees, some of these elms as well. By 1938, there were 30,000 trees in Oakland, over 1,000 of these elms. Most of that species succumbed to Dutch Elm disease in the early 1970’s. Notwithstanding, it is understandable that within this rolling, wooded area, people not only came to visit graves, but to enjoy strolling, solitude and even picnicking. The trees and ornamental plantings and open areas made it an early public “garden”. 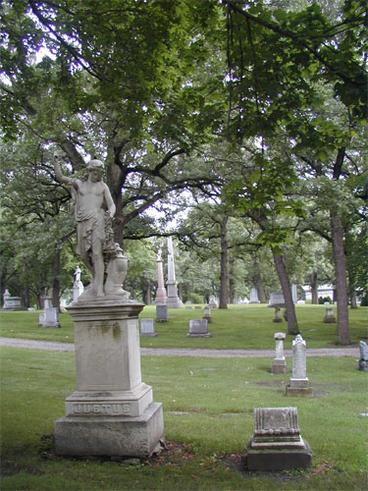 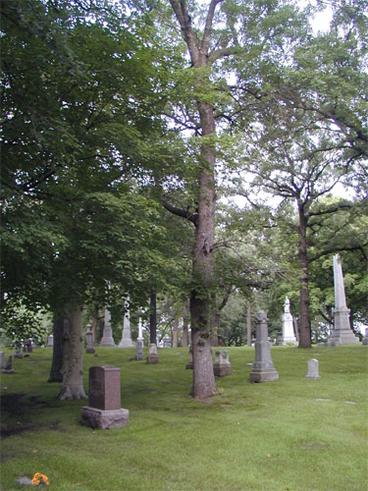